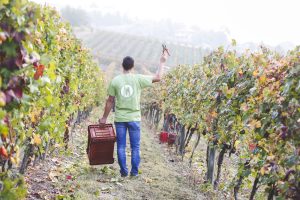 Anyone who, in the years to come, tastes one of the Bava wines from the 2021 harvest, will enjoy a Barbera, a Nizza or a Barolo that contains and expresses over a century of eonological expertise. Because a wine is almost never the fruit of a single harvest; it tells the story of those who conceived it, produced it and brought it to the table.

110: that’s how many wine harvests have gone by since Giuseppe Bava inaugurated his hotel, with restaurant, ballroom and wine cellars, in Cocconato. The building was located right next to the Asti-Chivasso railway line, which was being built through the Asti hills, a stone’s throw from the station: a short time later, the new railway would allow easier movement of goods and passegers between Asti and Turin, boosting commerce. 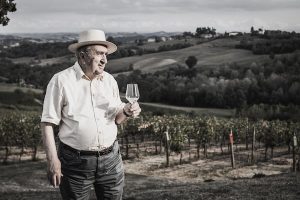 This year, Bava passes a new milestone in its history. The winery is headed by the founder’s grandson, Piero Bava, who will turn 90 in September. Recognized in 2016 as one of the “Patriarchs of Barbera”, Piero celebrates his birthday along with the winery’s: he first entered the wine cellars when he was just a few months old, and he still pays homage to the family legacy today, aided by his sons, Roberto, Giulio and Paolo, and grandchildren, Francesca and Giorgio. Three generations working shoulder to shoulder to offer wines that speak of Piedmont in over 50 markets worldwide; authentic, sustainable and eco-friendly, rooted in the family’s values of hospitality, dedication and good taste.

“At 90, it is impossible not to look back at the long road the whole family took to get here: when I was a boy, we made deliveries in a horse-drawn wagon. Now container ships take our wines to Asia and the Americas. I cannot deny that I am proud to be on the wine lists of so many famous restaurants around the world, because it validates the hard work we’ve put in at the winery for all these years. But the biggest satisfaction of all is that my grandchildren have joined the company, so continuity is ensured: my devotion to this task, a job I have truly loved, has not been in vain, but has borne its fruits.“

…”Piero is true to form on his birthday: 90 years young, always looking to the future. Here at Bava we’re a hundred and ten years young. It’s not enough to be “historic”: the point is to invest in the future, to create a business and family team that is ready and able to oversee change. And naturally, to avoid any compromise on the quality of our wines, which bear our name on the label!”.

“110 is a milestone, but we’re not the kind of company that stops and looks back: an anniversary this significant increases our motivation to do even better in the future. As the first member of my generation – the sixth at Bava winery – to join the company, I particularly feel this responsibility. Entrepreneurship has been part of our DNA ever since the winery was founded, going back to 1911, when Giuseppe, a.k.a. “Pinolu”, had the bright idea of opening a wine cellar and restaurant near the Asti-Chivasso railway line, serving passengers and opening up to the world.” 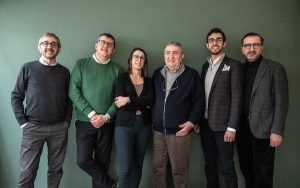 110 years is a long time. Long enough to outline and then define a style – in the vineyards, in the wine cellars – long enough to circle the globe more than once, with tastings, meetings and toasts in a multitude of languages.

Roberto Bava has created dozens of menus for his legendary wine dinners, which have thrilled gourmets on five continents. Framed and hung on the walls of the wine cellars, they are tangible evidence of Bava’s legacy of creativity.

The family-owned vineyards have expanded over the years, from Monferrato to Langa da Barolo, and today they total 50 hectares, along with 20 hectares of woods, hazelnut groves and meadows, to ensure biodiversity. The techniques have gradually improved, the ideas have never been lacking. Production has increased over the years: there are now 14 Bava labels, representing a prestigious oenological cross-section of this area of the Piedmont region.

The winery has remained true to its first love, Barbera, exemplified by the flagship, Stradivario, an exceptional, long-lived Barbera d’Asti Superiore.

The vineyards of Agliano are the birthplace of Libera, a steel-aged Barbera d’Asti, and Nizza DOCG Pianoalto. Bottle-aged, sparkling Barbera del Monferrato is a traditional regional wine that combines the elegance of the production method that calls for re-fermentation in the bottle with the authenticity of Piedmont’s traditions.

In the strikingly beautiful Vigna della Pieve, in Cocconato, in addition to Stradivario, we produce the grapes for Thou Bianc, a surprising Piedmont Chardonnay, as well as Sauvignon Relais Bianc and Albarossa.

On the Castiglione Falletto estate, in the Langhe, in the province of Cuneo, in the very heart of the cru Scarrone, grow the grapes that go into Bava Barolo DOCG and Langhe Nebbiolo.