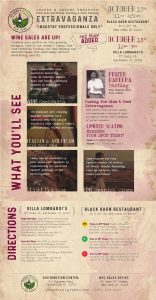 PianoAlto Bava 2014: Despite its having been one of the most complex to manage in the vineyard in recent years, the favourable end to the 2014 vintage proved to be pleasantly surprising in terms of the quality of the grapes. Observing the climatic pattern, it can be noted that the growing degree days were in line with the data recorded over the last few years. Furthermore, the days with temperatures considered positive for the physiology of the vine were distributed over the entire growth cycle, starting with the mild temperatures recorded as early as the beginning of the winter. Spring appeared gradually – but early – in the vineyards of the Langhe, meaning that growth also resumed earlier than in the previous year. A certain degree of graduality could already be seen in the physiological development of the wine from its early stages, with the differences due to the variability in the microclimates in our valleys appearing clearer than usual right from the outset. The beginning of summer saw temperatures which were entirely in the norm, allowing for the slightly early growth that developed in spring to be maintained. Rainfall during the summer was above average, in terms not so much of the number of days as of its intensity. The wines can be expected to be well-balanced, and though they may have less structure and alcohol they will certainly be blessed with a considerable quantity of aromas, together with a marked intensity of colour due to the anthocyanins.

PianoAlto Bava 2011: The 2011 vintage will be remembered as unconventional with its very early harvest and not overly high yields in the vineyard. An abnormal heatwave and high temperatures in April brought the start of the growing season forward almost 20 days. In July average daily temperatures were not particularly high, and accompanied by light rain storms. Very high temperatures were recorded during August and the beginning of September, followed by light rainfall. Lower night-time temperatures mitigated the warmth and allowed the wine to gain an excellent tannin profile and good color, as well a truly interesting aromatic profile. For Barbera, the vintage was very positive: thanks to the heat at the end of August and September, there was a reduction in the variety’s typical acidity, while the sugar content increased slightly along with the phenolic substances which provide excellent structure and balance.

PianoAlto Bava 2001: Little rain and very hot temperatures (apart from September): these conditions, together with a good level of residual humidity in the soil, strongly characterised 2001, allowing the grapes to ripen beautifully and slightly earlier than usual. In assessing the quality of the red varieties, consideration must be given to the climatic conditions recorded from August to October, which delayed ripening by several days compared to the previous year. This was caused first by sultry heat in August with no rainfall, and then by a sequence of rain and lower temperatures in early September. The low temperatures sharply slowed down the vegetative activity of the vine, while a good supply of water at the roots led to sudden swelling of the berries, and resulting dilution of the sugars and corresponding postponement of the ripening. Subsequent fine weather meant that all the red varieties ripened in excellent, sound conditions, with fine acids and and good sugar content, although the latter was slightly lower than in previous vintages, which had all seen particularly early ripening with a lot of sugar. Barbera reached good alcohol and acidity values, packed with polyphenols and very strong, persistent aromas.

PianoAlto Bava 2000: The climatic conditions this year furnished great prospects for the 2000 harvest, promising characteristics generally comparable in quality terms to those of the previous vintages. A mild winter with infrequent snowfalls led to early germination of all varieties. A wet spring – with a high risk of downy mildew attacks – was followed by a long, sunny, well-ventilated period with pollination of the grape flowers and development of the berries. Véraison – when the grapes begin to mature and change colour – ran its normal course in favourable atmospherical conditions. From mid-September the atmospherical conditions started to change gradually, with rain and clouds alternating with days of sunshine. Any assessment of the quality of the red varieties must make a distinction between early and late ripeners. The former – such as Pinot Noir, Dolcetto – were penalized by higher than average temperatures in the second half of August and early September. The late-ripening varieties – Nebbiolo and Barbera – reached September in excellent health, taking advantage of the alternation of occasional rain with sunny periods, and gradually dropping temperatures. Barbera yielded an excellent degree of alcohol with average acidity, a high content of phenols, and lingering, intense aromas.

PianoAlto Bava 1998: From the point of view of the quality, all the grapes – both black and white, both early and late ripeners – presented themselves as healthy, good-looking, aesthetic flawless. The sugary content is not too high, probably because the plants weren’t able to capitalize proportionally the hot and dry weather of the summer. Nevertheless this situation is evaluated positively because predict a condition of balance of the wines. The maturation situation is probably better for the medium-late wine grape varieties (Barbera and Nebbiolo), while it appears less complete for the early ones (Arneis, Favorita, Chardonnay, Dolcetto). Differently, the quantity production is not excellent, with a 10% decrease f the quantity level.